Merry Christmas Everyone, a bit late I know but I've had lots going on in the background and I certainly can't wait until we get into 2012 and put this year behind me.


I have this cutie from Marianne Design called, Lazy Daisy. Isn't she a little darling, I always used to think of Marianne Design as Dies so it was a nice surprise to see that Marianne also designs cute little stamps and right now at Bunny Zoe you can grab them in the SALE.  So when you done here, hop on over. I made this card for a blogging friend and I forgot to take a photo of the tag pulled out which said, "Happy Belated Birthday".  I was rather late due to some personal issues but hopefully it was worth the wait and you know that old saying, it's better late than never" hey? I used several copic markers on her hair using light strokes to create movement; E25, E31, E50, E19 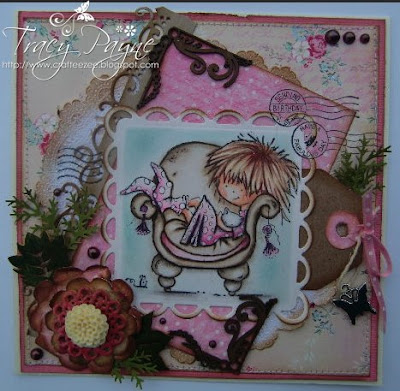 Other Materials:-
Image Lazy Daisy
Papers: Marianne Design
Prima Resin Flower
Wooden leaves/flower distressed with Tim Holtz Distress Ink
Martha Stewart Branch punch
Corners are lasercut chipboard by Make It Crafty
Magnolia Swirly Lace Doohickey Die
Flat Backed pearls
Flower is from the Craftable Oval Die that comes with 3 dies to make a flower
I have a second card too which is for a male , I don't know about you but I don't enjoy male cards as much as all the cute and girly ones, but I love how it turned out.  I have used a Mo Manning digital image and this teenager texting on his mobile phone could quite easily be my son.  The papers are from Websters, aren't they gorgeous. The snowflakes are lasercut chipboard diecuts and I have added some snow puff paint, heated with my heat gun and sprinkled with some stardust stickles. 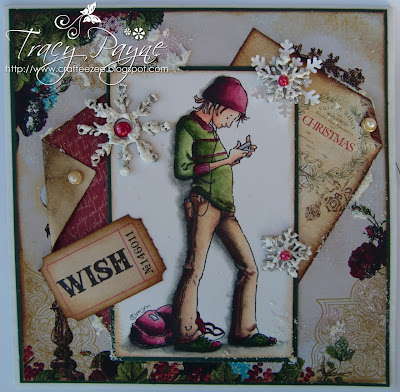 Wow, both cards are lovely, great colors! I too feel that it's less fun to make male cards since they are more difficult for me and you can't put too many embellishments on there. Hugs, Hanneke

love both your cards, Tracy. I don't enjoy doing male cards neither! but yours are both fantastic!
Hug, Alessandra

Hi Tracy, love your Daisy card, these stamps are so cute! And I actually love to see male cards, cause I find them so hard I'm always glad of the inspiration! Love this one, gorgeous snowflakes! Hope you had a great Christmas, hugs Frea

Gorgeous cards, the male cards are always difficult but you have done a fab job with this one...

Both gorgeous cards Tracy. Just love your girly card and what a sweet stamp!
Clairexx

They're both absolutely gorgeous Tracy, your copic colouring is phenomenal! Love the designs and gorgeous details too. Wishing you a very happy new year. Hugs, Chris x