I have been MIA for a few days, I had Sunday all planned to get some crafting done and it all went wrong.  Housework was done and it just remained for me to take little Ollie out for his walk so he would be tired and hopefully sleep whilst I set to task in my craft room, but my worst fear happened.  We had only just arrived at the dog walk park when from about 30ft from us two dogs spotted Ollie and travelled the distance in next to no time.  I was unable to pick him up quick enough so the Rotweiler managed to sink his teeth into Ollie.  The squealing and crying from Ollie is still haunting me.  I tried to prise the jaws of the attacking dog apart but just couldn't move them.  I couldn't pull Ollie away as he had his ear between his jaw and had no intention of giving up. It seemed to go on an age with Ollie screaming before the owners, who were throttling the Rotweiler managed to get him to let go.  Ollie's ear was bleeding and he went into shock in my arms and I was shaking like a leaf.  As you all know I'm a new dog owner and was really enjoying my little pup and this came as quite a shock to me, and one I certainly don't want to repeat.  From speaking to other dog owners I think we actually came off lucky as this particular dog as attacked before but the last little dog didn't make it.  I think because I had a hold of Ollie that the Rotweiler couldn't take him off and shake him about.  Fortunately the second dog just watched the attack and didn't join in, thankfully.

Once I calmed down I noticed that the attacking dog had his lead put on and a muzzle.  I did question the owners as to why on earth this dog was off lead and they responded by saying, "he doesn't usually attack", although I have heard different.  The owner then said to me to put Ollie down, which I refused to do until she had put the second dog off lead onto a lead.  Can you believe she said to me, "oh he's alright, he wont hurt him".  It was only two minutes ago that apparently the other one didn't attack!

I cleaned up Ollie's ear and I put my hand on his head to keep him still and noticed more blood on the top of his head.This time it was a small hole, a puncture from the tooth of the Rotweiler.  Poor little Ollie. It has certainly made me wary and I am yet to take him back to the dog walk, which he used to enjoy.  I won't be trusting any dogs at all from now and after receiving some sound advice from my MIC teamies, I will be carrying a spare lead to swing around and an umbrella.

So after my little rant I'd like to show you my DT card for Crafts and Me which has the theme of "Birthdays", nice and easy.  I also placed this card onto the Copic Marker Europe blog and if you haven't visited for a while, hop on over, there's lots of inspiration and tutorials.  Right, lost my way again, I have used one of the new stamps from Crafts and Me.  They are all so beautiful I had difficulty choosing which one to colour up first.  This image is called  Black Rose. 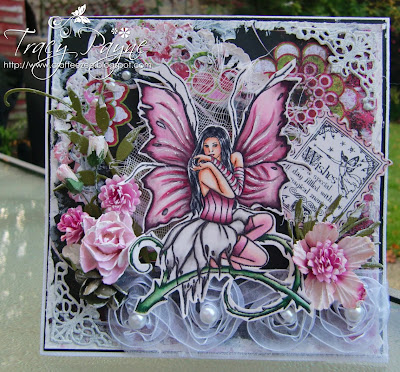 I have coloured her wings and bodice using one of my favourtie combo's, R85, R83, R81 and the colourless blender with R81 to blend out
I also used the COPIC Opaque White with a fine tipped paint brush and added white strokes to the wings. The Copic Opaque is so useful for adding highlights as well as creating snow. 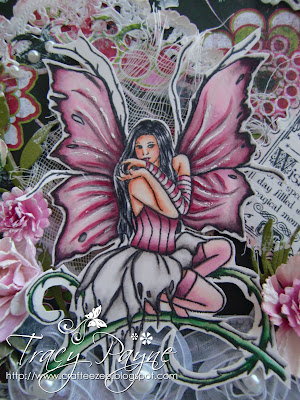 For the skirt I used my Greys C5, C3, C1. For the skin combo I used E000, E00, E01, E11, and for the hair I have used C7, C5, C3 leaving small areas white for highlights.
The vine has been coloured using YG67, YG63, G20
Full list of Materials:-
Image "Black Rose" from Crafts and Me
Paper is very old from my stash, sorry there is no name on the back
Ribbon roses from my local craft shop Loobi Crafts
Fairy Wishes sentiment stamp is by Whimsey
Marianne D Creatables branch forest LR0150
Flowers by Prima and Wild Orchid Crafts
White Gesso for distressing
Cheesecloth
Pearls from BunnyZoe
Copic Opaque
I hope I have inspired you today and I look forward to reading your comments.

I would like to enter my card into the following challenges:-

Wow what a stunning card. The colours and the colouring are beautiful.

Sorry to hear about your puppy.
We have a small pom and you have to be so careful. Some owners are very irresponsible with their large dogs.

Oh sweetie how bloody awful I dont like those kind of dogs they petrify me I think they should all be muzzled when they are out & DEF kept on a bloody lead. Poor Ollie hows the little mite now.......I'm so shocked hun I hate the thought of animals being hurt. Make the umbrella one of the larger type ones hun with the pointy bit at the bottom.
Your card is beautiful I love the new stamps, I cant wait get mine lol they are lush.
I'm gonna go make meself a cuppa now cus I really am shocked about your little Ollie it really is awful shug. Hope you are both ok especially Ollie the poor little thing.

Hallo Tracy, love your card as always, glorious layout and colours. So sorry to hear about Ollies not so nice adventure in the park. Owners who do not take proper precautions with their big dogs are just irresponsible and the rest of us have to tolerate them. so unfair. I have a medium dog (pointer) and a little dog (cocker spaniel) and both have been brought up to be softies, not least cos we have four kiddies. I would be mortified if they were ever attacked by a rottweiler. I think like Vicky, that I need a cuppa now. It gets me so mad. Do hope you and ollie find somewhere safe and friendly to go on your walks and that you are not too traumatised. hugs heidi xx
ps I have some Squiggles Candy at the moment if you are interested.x

Oh Tracy - what a terrifying thing to happen for both you and Ollie. I hope Ollie makes a speedy recovery and that you find somewhere safe to walk.
Love this card - beautiful colours, gorgeous DPs and fantastic embellishments.
Hugs
Denise xx

Tracy, I am so pleased to hear Ollie is o.k and that you were not hurt in this attack, it frightens the life out of you doesn't it. This is exactly why I do not take Jak over the park, as so many owners let their dogs off the lead there which shouldn't happen.
Your card is beautiful Tracy really pretty.
Teresa x

Jeeeeesus, Tracy, what shocking news!! Poor Ollie, how's he now? you know, it's aweful what happened but I also feel sorry for the other two dogs...because they have stupid owners!! I really can't stand bloody headless and senseless people owning animals! I always say animals are the mirrors of their owners...if they are aggressive so are their pets, if they are scared of everything, so are their animals. Oh man, hope you both have relaxed a bit and Ollie isn't too hurt. Poor Sweetheart!
Hug u both!
Alessandra

Oh my god how awful for you and Ollie some dog owners are so irresponsible if its attacked before it should be kept on a lead as it cant be trusted it really shouldn't be allowed in a public place and i am a dog lover even though we don't have one now. I hope you and poor Ollie are ok.

As for your card Tracy its stunning as they all ways are. luv gina xx

That is shocking news Tracy i hope Ollie is making a good recovery,you should have complained to the police ,god knows what could happen to the next poor dog that crosses their path .

Your card is just beautiful x

Hi Tracy, aww your poor little doggy!! I can't for the life of me understand why people would want to own dogs like that!! And leave them running around without a leash on at that!! I would be totaly furious! Glad your Olly wasn't hurt badly, he was very lucky! Anyway, love this gorgeous card you made hun, breautiful image and lovely colouring. Hugs, Frea

Oh No Tracy poor Ollie! That all sounds like a terrible ordeal for both of you. I hope he is much better soon and gains his confidence back poor mite. Your card is stunning a beautiful image and wonderfully showcased hugs rebekah xx

This is just beautiful.. Very lovely work..Thanks for joining us at TPS this week.. Hugs, Linda

Gorgeous image and fabulous colour choice. Thanks for joining us at TPS, good luck with the challenge. hugs Shirleyxxxxx

a gorgeous card with a magnificent colouring!

thanks so much for playing along with us at Ruby’s Rainbow Challenges!

Thank you for joining us this time at Ruby's Rainbow, hope you will join us again soon xx

Wow! This is beautiful Tracy, I love all the details :)
Hugs
Tracey
x

Your card is gorgeous Tracy and I love the white highlights. Sorry to hear your story, hope he's better soon and out playing!
Clairexx

Such stunning card Tracy! It's fantastic! Sorry to hear about your little doggy. Hope he is healing fine and that he can get used to meet big dogs again.
xxMarie

Sorry to hear about your dog Tracy.
Your card is beautifull.

One of my favorite images and also learns something new from you on this card. Tracy this card is gorgeous...I love the frame and the flourishes, and your Tilda is colored perfect...
fire equipment signs