I've been running around here, there and everywhere today and just haven't had the time to tell you the fabulous news, LOOK................

Yayyy, I'm on the Bunny Zoe Design Team. Can't wait to get started.
And for my second bit of news, OMG, just look at what fell into my arms today:- 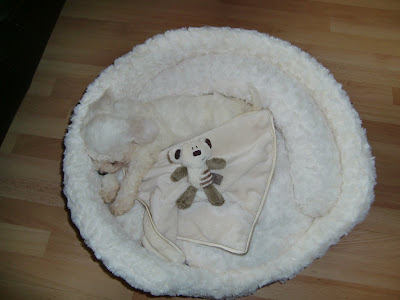 This is Ollie.  He is just over 8 weeks old and is a Bichon Frise. This was the smallest bed from Pets at Home, his head is about the size of a tennis ball.  He is just soooo cute!
I was convinced by my daugher who has been harpering on about never having a puppy, and as she has had such a terrible time of late, with the recent loss of her best friend I have given in.  So when my friend came over from Spain with her Spanish Water Dog and decided that she was going to return to the UK for good, I offered to look after Kira whilst she returned to Spain to pack up her house.  I said to Jade and Conor, right this is your time to look after the dog and if all goes well I'll let them have one.  What I didn't expect was how much I was going to love Kira and when Andrea gave me her return date, I was upset to think we would have to give her back, so this is where the story began.
I would like to say though that not owning a dog before I searched the online Ad places, with help from a couple of friends of where to look, and I nearly fell victim of the scams that are going on. I was so shocked by this.  I contacted one of the Ads for puppies advertised in Guildford.  I had a response with a load of questions about us as a family, kids, if we had a backgarden etc.  I saw this as a good sign that they were looking for a good home.  I answered them all and received an answer back saying they were happy with my replies and that due to work relocation they were actually located in the Isle of Man, but this wouldn't be a problem as for £250 he could arrange in the morning, puppy transportation.  I wasn't 100% happy with this, so said I would look for my own transport, to which surprisingly he said yeah o.k.  I thought well he must be genuine.  Transport quote was £750, so of course this route was out of the question.  I advised that it wasn't working out and he said he could do it for £150.  To cut a long story short after googling I found out that this is a scam and you would never receive the puppy and you would go on to receive calls from the transport company with problems, like the wrong crate and they need another £500, etc. etc.
I enquired after another 3 different puppies all with different locations, and all the responses were similar to above.  So just to warn you if you get anyone changing the location to Ireland, Isle of Man or anywhere a long way away, and the offer seems to good to be true, then it is.  Stay well away.
Thankfully we travelled an hour to Essex for our little Ollie and he is adorable.

ooo..your puppy is super sweet..terrible about the scam though...and congratulations on your new DT post can't wait to see what you create :0)...hugs Debs x

Hi Tracy, wow hun, your little doggy looks adorable!! What a cutie, I can imagine you totally falling in love with him. Hugs, Frea

Someone tried to scam us a few months ago too, free dog all they wanted was from us was to ship him over, yeah right. We knew right away it was a scam and reported the ad. The ad was back up a few days later. It's so upsetting to see how horrible people are.

But your new baby is just adorable, congrats on your new family member, enjoy him! :D

Silly me babbling, congrats on your new dt!!!

Congrats on your new DT you busy bee!

And I LURRRRVVEEEE your new baby!!!!! He looks so cute and I just love puppies so watch out I don't nip over and steal him! LOL!

Congrats on your new DT! They are lucky to have you:) as is your new family member!!!

Wow, Tracy, Ollie is such a cute puppy! Oh Gosh, I'm in love with him, too *lol*...
There are so many shocking things going on with animals, it's breaking my heart. I mustn't watch documentations or read newspaper articles it's makes me ill and I have to cry for days...I try to help when I can, but still it is so shocking and humans are so cruel it is unbelievable... but enough or I'll strat crying again...
Have a wonderful sunday!
Hearts & Hugs, Alessandra
PS: Concrats to the new DT-Membership :)

Congrats Tracy you will be an asset!
and how cute is the puppy!!! glad you weren't duped!

congratulations Tracy and your wee puppy is so gorgeous x

What a little cutie. So sweet. Congratulations on your news of being on Bunny Zoe's design team.You deserve it.Love Debbie x

Congratulations on your new spot, and on this adorable little cutie.

Hey Tracy, great being team mates! Congrats to you. And your sweet puppy is really the cutest. How lucky you were not getting a victim of those terrible peoples. How sad that such things happen.
Hugs, Karina

Oh big congrats Tracy on your DT place but oh my god how adorable on little Ollie. He is so like my little Ollie when he was a babe and I know you will have so much fun with him. How has he settled in?

Aawwww Tracy, hes so sweet, when I got my westie Bobby he was so tiny he sat in the palm of my hand, the breeder also bred bichon frise, they are very cute. Congrats in the DT position at bunny zoes,
Hugs Kat x

I'm not a dog person - but even I couldn't help a big AWWW at the picture of your new family member. x CUTE

BTW I removed my last post as I'd mis-spelled about a million words!